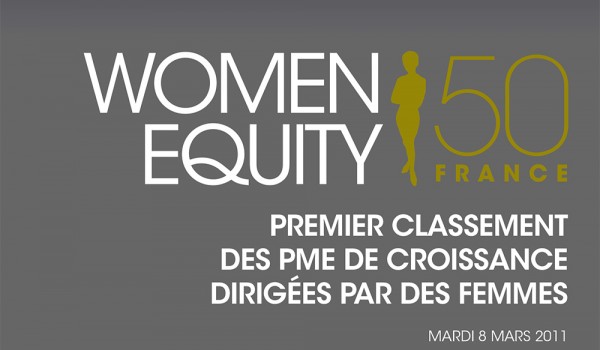 The top 50 French small and medium-sized companies with the best performance and with women as bosses. The ceremony took place in Paris on Tuesday 8th March 2011.Our company ISOLVAR holds the 25th place all companies combined and first place as a company in the public buildings and works sector.

The number of independent companies managed by women and where the turnover is over 4 million euros (one of the criteria of this classification) amounts to more than 4000 in France. In partnership with BNP Paribas Wealth Management, “Women equity for growth” worked out this list of prizewinners and is designed to support the small and medium-sized companies run by women.

In order to form its growth index, “Women equity for growth”, in partnership with BNP Paribas Wealth Management, accepted 4000 French companies ( excluding subsidiaries, listed or franchised companies, cooperatives etc ) , having : – achieved a turnover of more than 4 million euros in the 2008 and/or 2009 financial years and employing between 20 and 250 employees – been registered with the clerk’s office for a minimum of three years – instances of women in management ( director, president, manager). Their performance was measured using five indicators and their average gave the final rankings : – the growth of the turnover in the last available year (2009) – The average growth of the turnover over the last 3 years – The growth in value of the turnover in the last year – The profitability over the last year – The average growth of the gross operating surplus.